We had to make the hardest decision today, we had to say goodbye to Harro Vom Heiligental of Reinglen (Harro). I can't tell you how much we are hurting right now. He was stuborn, willful, aggravating. He made me laugh, he made me cry, he drove me crazy. He was the daftest most lovable dog ever and I will miss him like crazy.

I miss Harro more than words can say. Some of you already know the reason we had to say goodbye, for those that don't, Harro being a high drive dog (some of you know that) did everything at 100 mph he gave 100% to everything he did. Because of this he did severe damage to both his front feet, he had nails and toes removed because of the damage, he has been on pain meds for over a year. The pain became too much, we couldn't watch him suffer so we let him go to permanent sleep. Rest in peace and run free my lovely boy.

Today Coda has had her first litter to Harro. She had ten healthy puppies. More information can be found on the litter page.

Today Cassie has had her first litter to Vislor Bulmer. She only had one black and tan female. More information can be found on the litter page.

Coda won the Northern Semi final of the The Kennel Club Good Citizens Dog Scheme Special Pre-Beginner Obedience Stakes in Edinburgh on the 17/11/2019 so will be competing final at Crufts in March 2020.

Cheryl and Coda qualified IGP1 on 10/11/2019 at Staffordshire IPO Club's trial under FCI Judge Thomas Nye. She got fantastic scores of tracking 98 obedience 91 and protection 94 total 283.

We are very pleased with the results Kassi's has had a caesarean and has one puppy. As this is Kassi's last litter she has also been spayed. More information can be found on the Sale page.

Kassi's Puppies have arrived. More information can be found on the Sale page.

Gabriella's Pride and Joy of Reinglen (Kassi) has been confirmed in whelp to Harro Vom Heiligental of Reinglen (Harro). More information can be found on the sale page

We had to say goodbye to Tip today. He was always a character and his tail never stoped wagging even when he was a grumpy old dog. He has been a constant fixture in this house now for a long time and he will be sorely missed by all of us. R.I.P. Tippy.

Kassi's Puppies have arrived. More information can be found on the Litters page.

Harro has tested negative for Pituitary Dwarfism. See his page for more info

Harro, Lexi and Kassi have all tested negative for Degenerative Myelopathy. See their individual pages for more info

Gabriella's Pride and Joy of Reinglen (Kassi) has had her first litter to Merjuke's Warrior (Roman). For more information visit our Sale page

Gabriella's Pride and Joy of Reinglen has been confirmed in whelp, details to follow

Reinglen's Kuro has been confirmed in whelp to Harro Vom Heiligental of Reinglen. Kuro is from Lexi's first litter.

Kassi received her certificate for Joint 5th place for Adult Long Coat Female in the UK.

At the same show at 11 and a half months old Harro was graded Promising under judge Joan Docherty.

Lexi passed her AD (AUSDAUERPRÜFUNG) test, which is an endurance test where the dog runs 12 miles alongside a bike and then does obedience at the end.

At the LORAKS dog show Harro got a 4th in Confirmation Puppy 6-12 months and 2nd in Fastest Recall. Kassi got a 1st in Junior Obedience, 1st in Finest Long Coat Under 5 Confirmation and 1st in LORAKS Special Award Obedience and Confirmation.

Kassi qualified to go to the semi-final of the Kennel Club Special Pre-Beginners Obedience Competition.

Kassi passed her AD (AUSDAUERPRÜFUNG) test, which is an endurance test where the dog runs 12 miles alongside a bike and then does obedience at the end. Then in the afternoon she did her breed survey where she was given a class 1. Harro also passed his bronze good citizens test on the same day. Kassi with her shield for coming first place out of all participants in the test. Kassi getting her BH 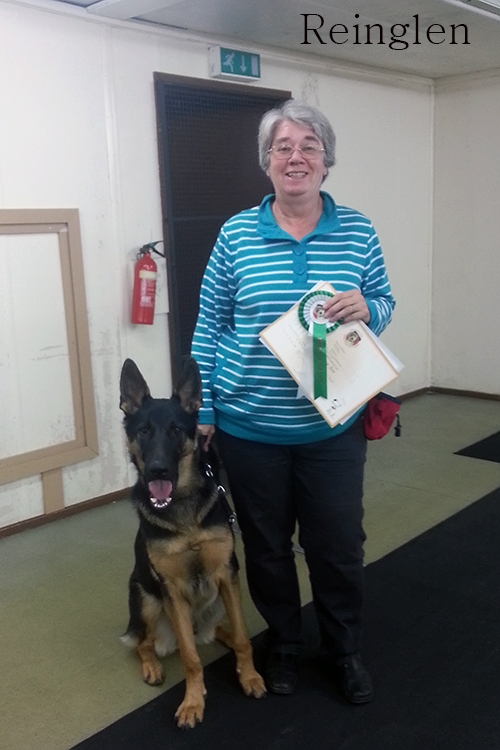 Kassi took 6th place in the intermediate longcoat bitch at the British Sieger.

Kurro passed her Gold and Silver Good Citizens test today at the age of 7 months. 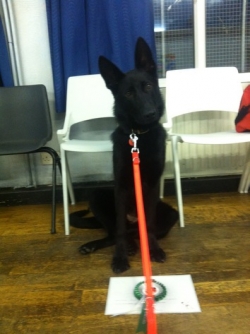 Kassi has got SG4 at the West Yorkshire GSD club Regional Show.

Today Lexi gave birth to her first litter! She had 3 dogs and 7 bitches, more information can be found on the Sale page.

The puppies are now all sold and their info has been moved to an new page that can be found listed on the litters page.